Here I brewed a favorite of mine, a local Michigan beer from local brewer, called Stan’s Pale Ale.  It’s not a true pale ale in the traditional sense, but it’s always very popular when I brew it. It’s early March in Michigan, pretty cold out, and this is my first winter outdoor brew.

I go though the basic process of brewing this beer with the Brew-in-a-Bag method. Watch me at each step, including preparation, brewing, fermentation, racking to a keg, and tasting. I was presented with a new batch of challenges with this outdoor brew, as the cold temperatures definitely changed-up the process a bit for me.

Step 2: Set water level marks to measure how much water is in the kettle. There are many places to calculate this online. I’m using stainless steel hose claps measured to the top. My three clamps represent the volume at:  mash level, pre-boil, and post boil. 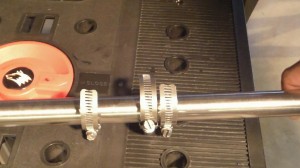 1:40 Just turned the burner up; I’m having major wind issues, but I’m starting at about 42 degrees.  I placed a few blankets on top of my lid to keep the temperature constant. I want to be at around 157.5 degrees, after walking away and returning I’m a bit over at about 160 degrees, but it will cool down quickly.

I put the bag inside my pot and clamped it down; now it’s time to add the grains and stir. I placed a coat over the pot along with a few blankets on top, and my temperature is 152 degrees exactly. After a while longer I had to pull my coat up to quickly to add more heat, leaving me at about 151 degrees. Recovery time is slower out here because of the cold temperature.

3:37 My mash is completed, and now I’m going to do a mash-out at 170 degrees for ten minutes. I remove the coat and blankets and being to pull the bag out, squeezing as I go. Be careful, the bag is very heavy.

4:21 Once that is completed I drop the hops in and stir. My temperature is holding well, and the blankets on top are helping quite a bit. I’m about 15 minutes into my boil now, and in another 15 minutes I do a second hop addition. After that, in about 10 minutes I will put in another 1.5oz of cascade for my final hop addition. 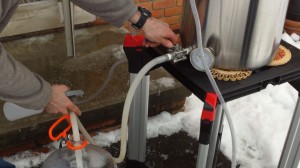 5:21 Next I add the Whirlfloc tablet.

5:35 Now it is time to put the wort chiller in, after that everything has been sanitized.

5:54 We are cooled and ready for transfer to the primary. I forgot to use my hop bag so I must rely on my screen strainer that in my kettle.

6:30 I take the first gravity reading, at about 72 degrees. I decided to pitch the yeast dry, and then aerate. I’m set to ferment with a blow off tube.

7:16 It is a little over 24 hours later and I have good active fermentation and volume. I also had good luck pitching the yeast directly, I haven’t noticed a difference.

7:40 It’s been about three days. I realize I did not need the blow off tube with this kind of beer, but I never like to take any chances. I kept everything wrapped up, and my temperature is sitting at about 66 degrees. 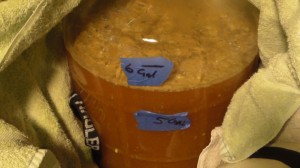 8:14 It’s time to put the fermentation lock on. I realized that I needed to switch my stopper because the previous one was slipping, and I need a good seal. The next morning after the lock was put on I’m getting good consistent bubbling.

9:04 It has been three weeks and it’s time to do another gravity reading. If it’s looking good we will keg today. My final gravity reading is only 1.020 (although the beer tastes great). I think this is because it’s just too cold. The temperature of the wort was about 61 degrees. So I have decided to move it from the basement to the upstairs closet. I’ll to try to keep it as still as possible during moving.

The move has created more action in the fermentation lock. About 24 hours later and the yeast is back in suspension and I can see some activity. Now the trick is to get the temperature right, not too warm and not too cold. My space heater has helped. While it’s 77 degrees in the room, the inside of the carboy is not that high yet. Six days later and I have been sitting at between 70-73 degrees. It’s time to sample to see where we are. 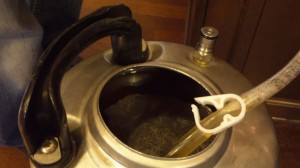 12:09 My last gravity reading did not produce a change after the week it was upstairs. So I have decided to keg it now. It has been four weeks and I don’t think there will be any advantage in racking it to a secondary for more time. This could be because of my yeast shortcut, temperature, etc.  It still tastes great it will just have a low alcohol content. Lastly I will cold crash it and let it clarify.

13:38 The alcohol came in a little light, but It tastes great and I’m happy with it. 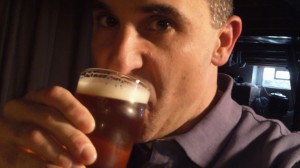