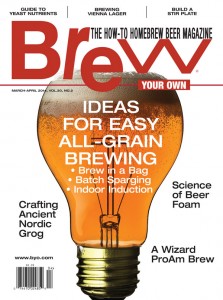 I’m very excited that I was able to write my first featured article for the March-April 2014 edition of Brew Your Own magazine.  The article, simply titled “Brew in a Bag,” is a step-by-step walk through of the brew-in-bag method, that’s great for beginning BIAB brewers.  I walk you through the entire process, which includes the pros and cons, equipment, calculations, and a complete step-by-step brew session.

This 96 page issue also includes other great articles for easy all-grain brewing including an article on “Batch Sparging Basics” and brewing indoors with “Induction Heat,” so you’ll have plenty of great ideas to help speed up the process of your all-grain brewing endeavors.

Other great articles in this issue include:

There are certainly many more articles in this issue and every issue of Brew Your Own, which comes in print, online, and app versions for tablets and smartphones.  If you’re not familiar with Brew Your Own magazine, you should be.  It’s the largest subscription-based magazine dedicated to homebrewing beer and has been doing so for over 18 years.

It provides many hands-on articles featuring brewing equipment projects and brewing techniques written by other homebrewers and brewing pros alike, to over 90,000 readers.  The magazine is published 8 times per year with bi-monthly issues in January – August and monthly issues during the busy fall brewing season from September – December.

Please check-out my BIAB article and let me know what you think.  You can pick-up a subscription here if you aren’t a subscriber already or want to renew your subscription.

Interest in Brew in a Bag Homebrewing is on the Rise